Israeli prisoner Ramil Razilo was removing rubble from the planned site of a new prison ward when his shovel uncovered the edge of an elaborate mosaic, unveiling what Israeli archaeologists said Sunday may be the Holy Land's oldest church.

The discovery of the church in the northern Israeli town of Megiddo, near the biblical Armageddon, was hailed by experts as an important discovery that could reveal details about the development of the early church in the region. Archaeologists said the church dated from the third century, decades before Constantine legalized Christianity across the Byzantine Empire.

Two mosaics inside the church - one covered with fish, an ancient Christian symbol that predates the cross - tell the story of a Roman officer and a woman named Aketous who donated money to build the church in the memory "of the god, Jesus Christ."

Pottery remnants from the third century, the style of Greek writing used in the inscriptions, ancient geometric patterns in the mosaics and the depiction of fish rather than the cross indicate that the church was no longer used by the fourth century.

Stephen Pfann, a biblical scholar and professor at the Holy Land University, said the second and third centuries were transitional periods where people sought to define their religious beliefs and modes of worship. Iconography and inscriptions found in Nazareth and Caperneum - places where Jesus lived - show that people went there to worship, although most did so secretly. "This was a time of persecution and in this way it is quite surprising that there would be such a blatant expression of Christ in a mosaic, but it may be the very reason why the church was destroyed," Pfann said. 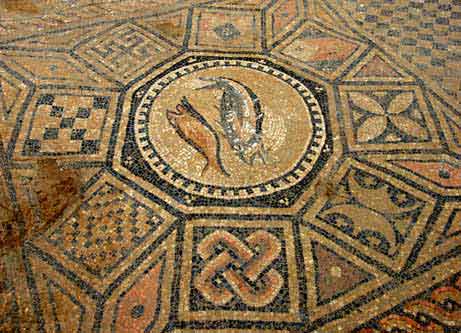 Additional information can be found in the book:
A Christian Prayer Hall
of the Third Century CE
at Kefar 'Othnay (Legio)
By Yotam Tepper and Leah Di Segni