Ancient Hebrew scrolls that were accidentally discovered in 1947 in the Judean Desert by a Bedouin boy have kindled popular enthusiasm as well as serious scholarly interest over the past half a century. The source of this excitement is what these Dead Sea Scrolls reveal about the history of the Second Temple period (520 BCE–70 CE), particularly from the second century BCE until the destruction of the Second Temple in 70 CE, a time of crucial developments in the crystallisation of the monotheistic religions.

The seven scrolls from Cave 1, now on exhibit to the public in the Shrine of the Book in Jerusalem's Israel Museum, are Isaiah A, Isaiah B, the Habakkuk Commentary, the Thanksgiving Scroll, the Community Rule (or the Manual of Discipline), the War Rule (or the War of the Sons of Light Against the Sons of Darkness) and the Genesis Apocryphon, the last being in Aramaic.

Cave 4 was particularly rich in finds; it contained nearly 15,000 scroll fragments that survived from at least 600 different compositions. The last cave wherein scroll fragments were found was Cave 11, identified in 1956. It consisted of long compositions, including the Psalm scroll, an Aramaic translation of the book of Job and the Temple scroll, which is the longest one from the area of Horbat Qumran (c. 9.5 m).

Conservation of the Dead Sea Scrolls. The scrolls are written on parchment and papyrus. Alongside the several long scrolls were many thousands of scroll fragments that were assembled to c. 1200 plates, including 900 plates of parchment fragments and 300 plates of papyrus fragments. Since first discovered by the Beduin shepherd, the scrolls have gone through immense upheavals until the establishment of the laboratory for the preservations of scrolls at the Antiquities Authority in 1991. The work in the laboratory is accompanied by scientific and professional consultation and the preservation process benefits from the vast knowledge and tremendous experience acquired by various preservation laboratories around the world. The preservation work is in its prime and the different scroll fragments are taken care of in the most newly devised preservation techniques. 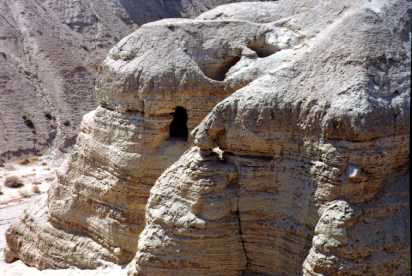